Joe Black, 65, a hunter of Behchoko, N.W.T., became separated from his hunting companions and was caught in a snowstorm shortly after noon Monday. He was later found after being missing more than 50 hours on the barrenlands and is recovering today in Stanton Territorial Hospital. Black was spotted near Murdock Lake Wednesday by a community member on board a helicopter with Civil Air Search and Rescue Association (CASARA) spotters. The helicopter was able to land and pick him up. Black was then taken to the Gahcho Kue diamond mine airstrip, where he was transferred to a Hercules C-130 that was also involved in the search. 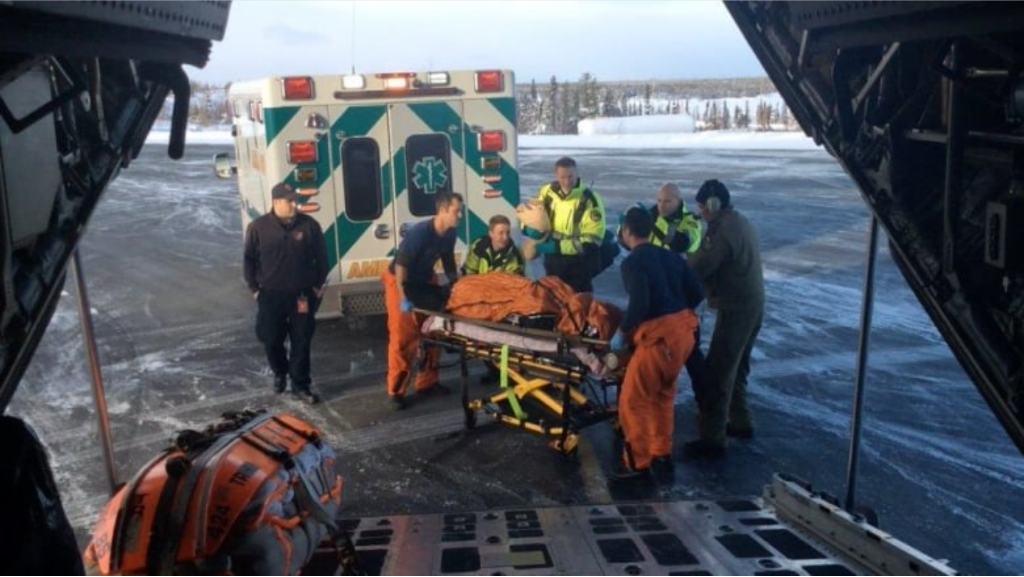 RCMP said Thursday that a conservative estimate of the number of people involved with the search would be 80 to 90 people, including community members from Whati and Behchoko, CASARA spotters, Royal Canadian Air Force crew, Gahcho Kue mine staff, winter road staff, Air Tindi, ACASTA Heli Flights and RCMP. Yellowknife ground search and rescue were also on standby. A great example of how the RCAF, RCMP, and CASARA among others can co operatively work together efficiently to successfully save people during searches!

CASARA National In the summer of 2019 hired a summer intern to help out the national office, where the target of social media was looked at and a plan was initiated to start connecting with our members and the public as an organization. CASARA had already established Facebook and Twitter accounts, but was rather inactive for the most part in terms of engagement. The plan included launching CASARA/ACRSA accounts on Facebook, Instagram, and Twitter to start building our social presence online as an organization and move towards connecting with people, companies, and partners moving forward. This plan was then shifted into the newly added Communications Officer to the National Office in the Fall of 2019 to handle the responsibility of moving towards a hypersocial" organization.

(LEFT) Showcases CASARA's Facebook page, (CENTER) CASARA's Instagram, and (Right) CASARA's Twitter Page in dark theme on the iPhone Xs. These Images are archived from 2021 to showcase what each platform looks like for our accounts.

The start of posting was targeted towards growing and starting up the pages so that we could produce content for our followers on a regular basis. This move helped CASARA establish a social presence that was not taken advantage before, for awareness of our organization and to connect directly with users in Canada, US, and further! This established a foundation online that has helped us connect and use our audience to better communicate, attract, and engage compared to where we were previously before starting up our social efforts!

In October of 2019, PEPAIR/CASARA held a GALA dedicated to a man who has spent 50 years In SAR and the past 35 years with CASARA. Charles “Chuck” Pachal is a man who has dedicated a great portion of his life to the advancement of civil and military aviation search and rescue. His efforts in search and rescue has positively impacted British Columbia to all across Canada. Chuck joined the Royal Canadian Air Force in 1942, where he served in WWII. After 27 years, he retired his service career and moved to Kelowna, B.C. This is when Chuck decided to join the Provincial Emergency Program (PEP) Air organization to get involved with SAR.

Chuck has influenced the civil aviation search and rescue community in Canada. Many of the current national and provincial aerial practices in the civilian and military sectors have been influenced by Chuck’s work. In Chuck’s service to PEPAIR/CASARA he held the positions of Pilot, Regional Zone Commander, Deputy Director of PEPAIR, and President of CASARA. His volunteer hours have involved dozens of searches, saving several lives, and through his dedication he has helped bring CASARA to the organization it is today. The civil and military aviation search and rescue practices in Canada would not be what it is today without his efforts and commitment. Chuck is still active in PEPAIR/CASARA and as always, committed to this organization. 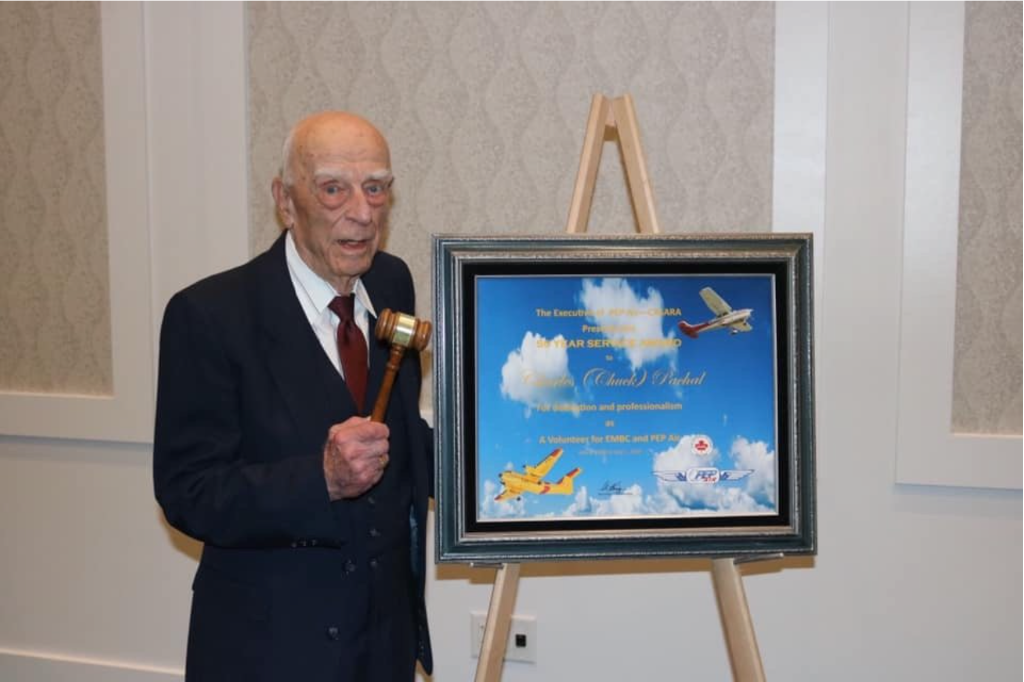 Chuck next to his SAR 50 year service award.

The GALA allowed CASARA and Chuck's family to celebrate the work he has done for 50 years! Alton King (Director of PEPAIR) hosted the GALA event and many speakers shared their generous stories of Chuck. It was a great celebration and we are thankful for the celebration that night.

CASARA eventually upgraded their national effort to transfer their old and outdated WordPress website over to brand new GRAV based website to revamp the direction and ability of the National Website. This included a new contact area, partners area, photo/video areas, a revamped members area and full Bi-lingual support for our national english and french languages!

The previous WordPress style website that was outdated and needed a major branding overhaul.

Our brand new website that was launched, adding a more effective and modern design.

As the website was launched, more initatives were completed on updating and improving the current design based on our volunteers feedback. This marked another step in connecting the national organization more effectively for the benefits it produced moving forward.

The Launch of a National Newsletter - CASARA Connection 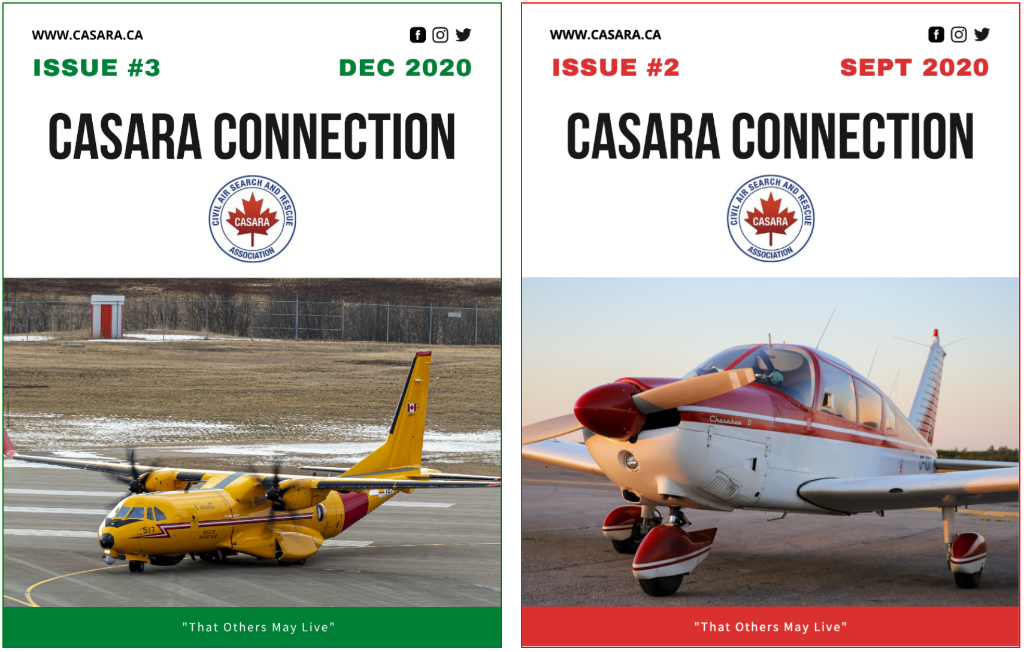 As part of our increased connection, the national office put forth a plan to develop a national newsletter. The newsletter was designed to engage our membership every quarter on various topics such as CASARA News, SAR News, Technology, Community, Equipment, Safety, and More! The launch of the newsletter was successful at launch and even had a national voting period to pick the official newsletter name, which would continue being produced moving forward into the 2020's.

Here are some of our original writers above that were involved with the first year of the CASARA Connection newsletter! As the newsletter began its run, the more features it included in every issue, evolving itself with time to improve the content given to our membership across Canada.

In early 2020 we faced a new threat that was international and it was called COVID-19. The COVID-19 pandemic created many challenges for us as an organization, with the main focus being in the operation and connection of the organization. Questions such as how will we host meetings? How will we conduct training? How are we going to continue being operational? These were all questions we had as an organization that we needed to find solutions for in order for us to adapt and change during the circumstances. 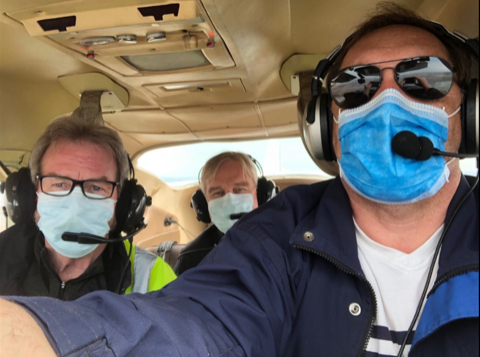 Image of a crew in CASARA SK wearing their personal proteective equipment (PPE).

Training and the number of taskings may have decreased, but CASARA rebounded in many ways in order to still remain operational. Conducting meetings through online platforms, engaging membership through newsletters, and keeping monthly directives from operations were all examples in how the organization had to respond to the decreased activity due to the pandemic. The experience strengthened CASARA in how we respond to external environment changes and how we use technology moving forward to be effective in our communication and connection as a national body moving forward. As the world changes and we are placed in ever-changing circumstances, CASARA will adapt in order to operate in the best way. This is achieved by using the technology and resources available to keep our presence and efforts operative within the search and rescue community.