National Office Moves From Military Base

On retirement of Mr. Rob Kilborn in September 1996, John Kelly, a retired Canadian Forces SAR Tech assumed the duties of National Administrator. Mr. Kelly worked at the National Office in the Air Command building for several years and eventually realized that there was not enough office space at Air Command to conduct CASARA business. CASARA National quickly outgrew its office space as the organization was expanding and needed more room to operate. However, none was available at Air Command or on the military air force base. The military was restructuring at that time and nobody was willing to give up any of their valuable space. The National Administrator discussed with the National Executive the issue of having limited office space to conduct business, no privacy and limited computer office equipment to conduct CASARA National business. Also, there was the issue that a security clearance was required by anyone visiting the office as it was located in the restricted operational area of the building.

CASARA financial and administration work load had increased significantly at the National office due to large yearly increases in CASARA operating funds that additional help was now required to conduct business. The Executive made a decision to open a second office off the military base and have the National Administrator hire a person to help with the additional work load. They requested the Administrator to work alternate days between the Air Command office and off base office. However, over time this proved to be a bad idea so it was decided to give up the small office at Air Command and work from the new National Office off base. The National Administrator still had full access to the Air Command building to discuss CASARA affairs with Air Command military SAR personnel.

Today the National Office has enough space and equipment for the National Administrator and assistant to conduct CASARA business in privacy, space to store large amounts of equipment & files, space to hold Executive meetings and space to conduct meetings with the military and other organizations. No security clearance is required to visit the National office. 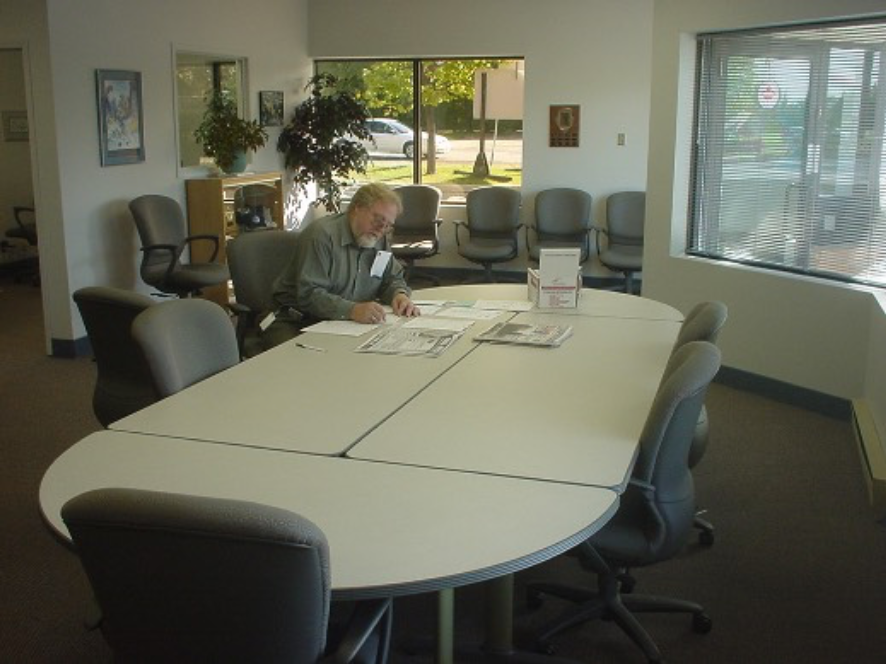 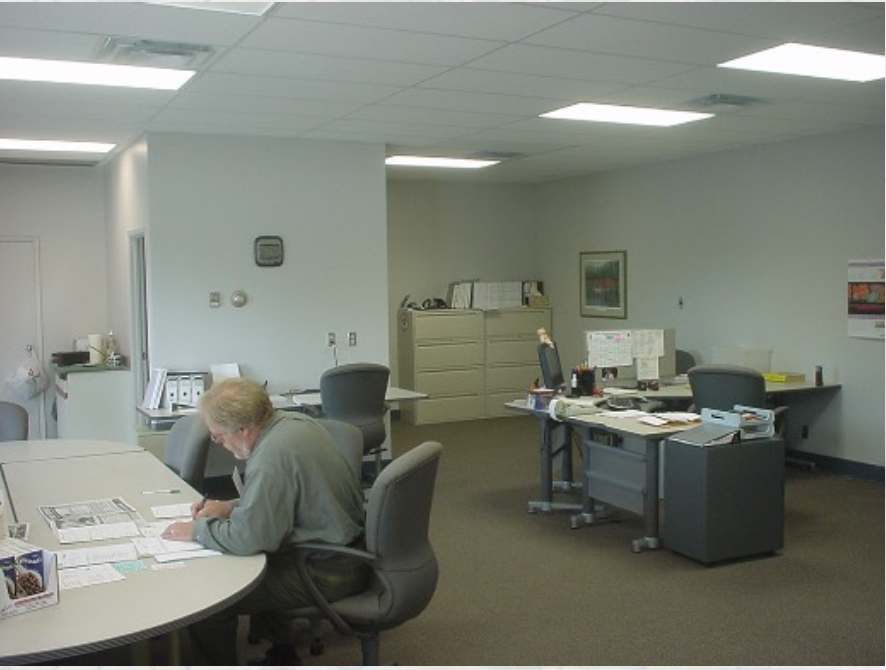 Arctic SAREX 2002, was conducted just outside Gimli, MB in order to exercise the coordination of a major air disaster response. Search and Rescue teams from the Alaska Air National Guard, Russian Air Force and Canadian Forces joined together in Gimli to respond to a simulated crash site north of Gimli, MB. Waiting for them was the wreckage of a mock airliner crash and with 50 CASARA volunteers inside and around the site, acting as casualties. Arriving by parachute into the site was not possible due to low cloud cover, A combination of six para-rescue specialist teams from each nation were taken to the site by Griffon, Labrador, and Cormorant helicopters to administer advanced emergency aid to the injured.

An array of rescue equipment was parachuted into the site, including a Canadian Major Air Disaster (MAJAID) kit by a Canadian Hercules aircraft at low altitude as another 130 Hercules aircraft circled overhead acting as the On-Scene Commander. John Kelly, retired SAR Tech and CASARA National Administrator with his Outstanding SAR Achievement Award. At daybreak the next day, casualties and their rescuers were transported by Cormorant and other helicopters to a hangar at the Gimli airport. Canadian Forces medical staff had previously set up an advanced medical area to assess and treat casualty injuries. 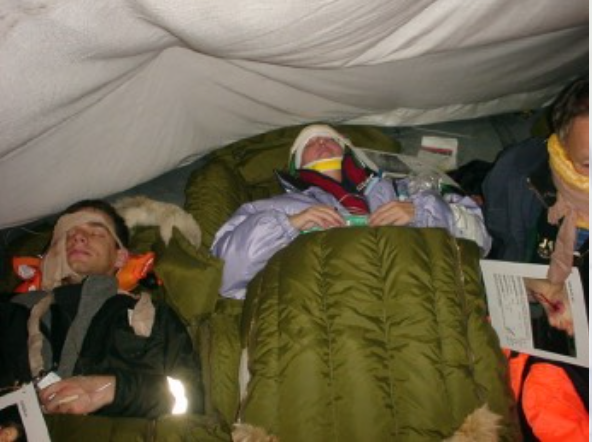 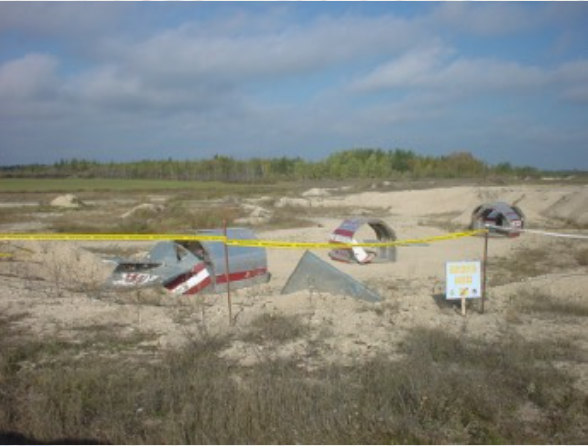 SPOTTER PRESENTATION “A MATTER OF LIFE OR DEATH”

In the early seventies Ottawa commissioned a study to determine the most effective way to search for and find a crashed aircraft in the wilderness. The study group visited all SAR squadrons across Canada and had operational SAR Techs view slides projected onto a screen of crashed aircraft in all kinds of terrain, during various weather & lighting conditions and in all seasons of the year. The slides showed crashed aircraft in water, mountains, on flat land and in different forested areas. At the same time an eye movement study was being conducted to see how a spotter’s eyes were moving while searching from SAR aircraft flying the different search patterns at various heights and speeds. On completion of the study a slide presentation called “Spotter Briefing” was developed and distributed to all SAR squadrons. It was used to train civilian/military spotters proper spotting techniques and crash site reporting procedures that were required prior to going on a search. The slide presentation served its purpose throughout the years but through time it deteriorated to a point that it needed to be updated. Eventually it became an antique. 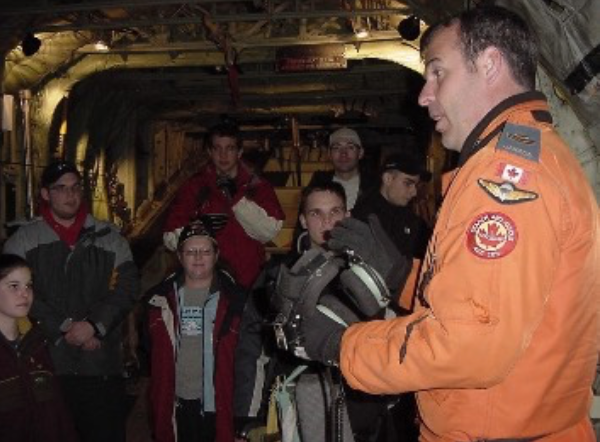 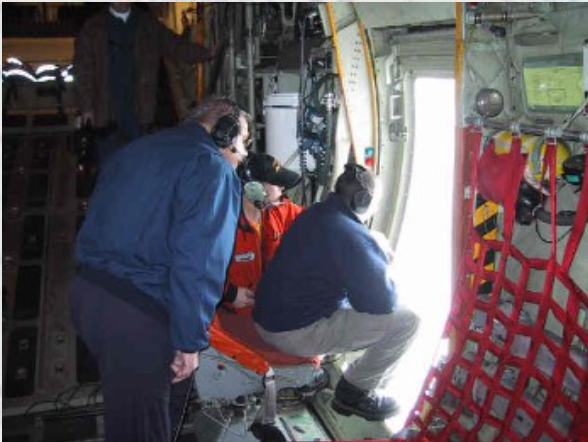 CASARA requested the Military to update the presentation and have it produced in digital video format rather than in a slide format so it could be easily distributed to all CASARA Zones across Canada. CASARA wanted to use it to keep its members trained and to train new members after the military conducted their initial spotter training. Digital video format would allow the presentation to be shown using computers rather than using a slide projector and screen. Unfortunately, the military had no funding available at that time to do the update.

CASARA, with military approval, came to the “rescue” in 2002. They contracted a graphic arts digital computer company to update the military Spotter Briefing and produce it in video format. The new Spotter Briefing was called “A Matter of Life or Death”. CASARA shared the new briefing with the military and SAR Techs and they use it today in the training of military/civilian spotters prior to going on any search. 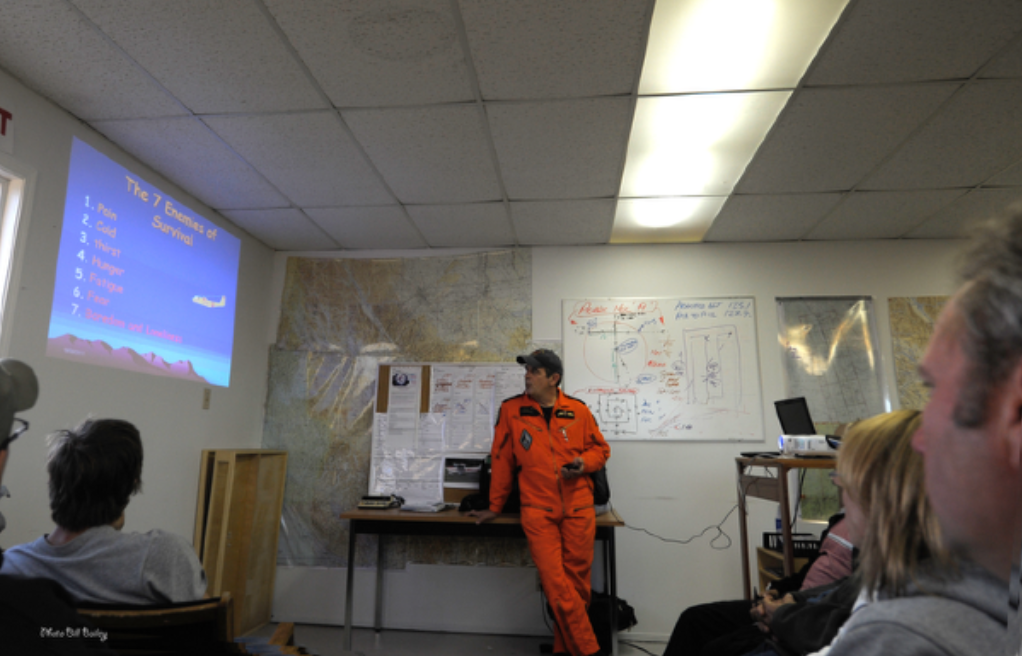 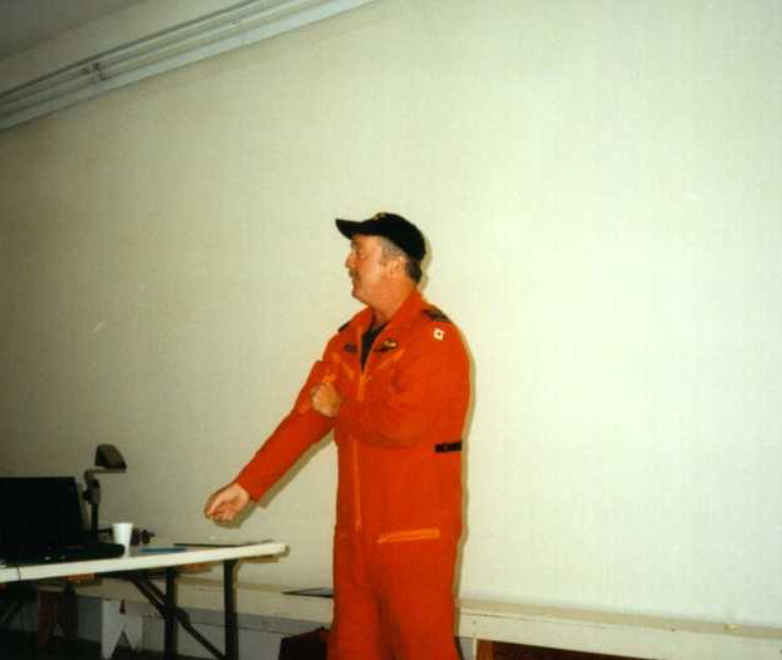 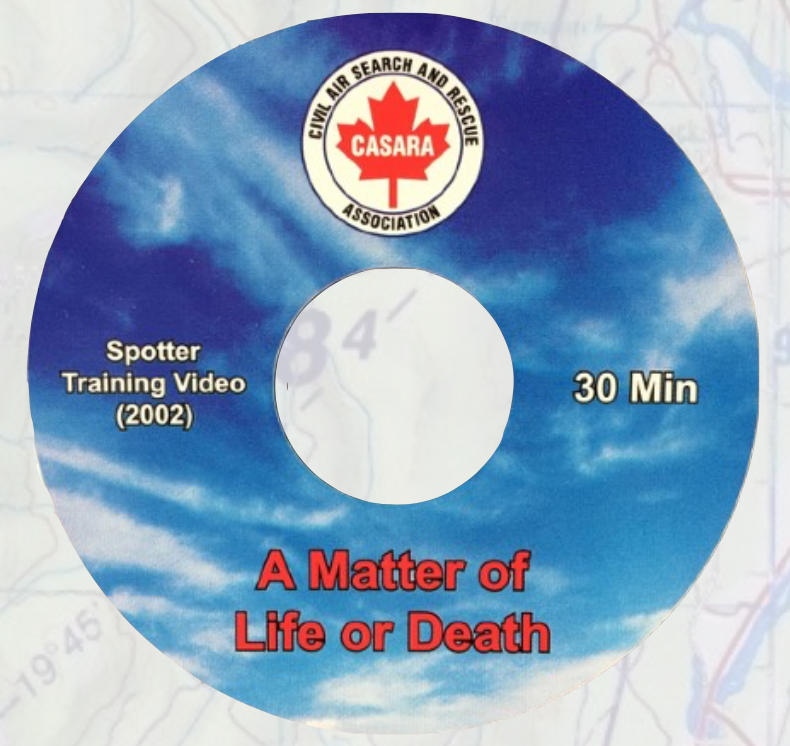 CASARA Spotter briefing digitized into a video format and put on a CD.

CASARA felt it needed to recruit younger members into its organization. They came up with the idea of training senior Air Cadets who were in their last year of the Air Cadet Program and who might be interested in joining the CASARA organization. Note: Air Cadets can only stay in the Air Cadet program until they have reached 18 years of age. Minimum age to join CASARA is 18 years of age.

CASARA signed a Memorandum of Understanding (MOU) with the Air Cadet League of Canada to give ground spotter training to senior air cadets whohad a keen interest in aviation and CASARA. They would be trained in proper procedures to use when searching for crashed aircraft and missing persons from an aircraft. They were shown the CASARA Spotter training video, “A Matter of Life or Death,” briefed on spotter rotation, communication and safety procedures, the survival pattern, the proper clothing to wear on search etc. 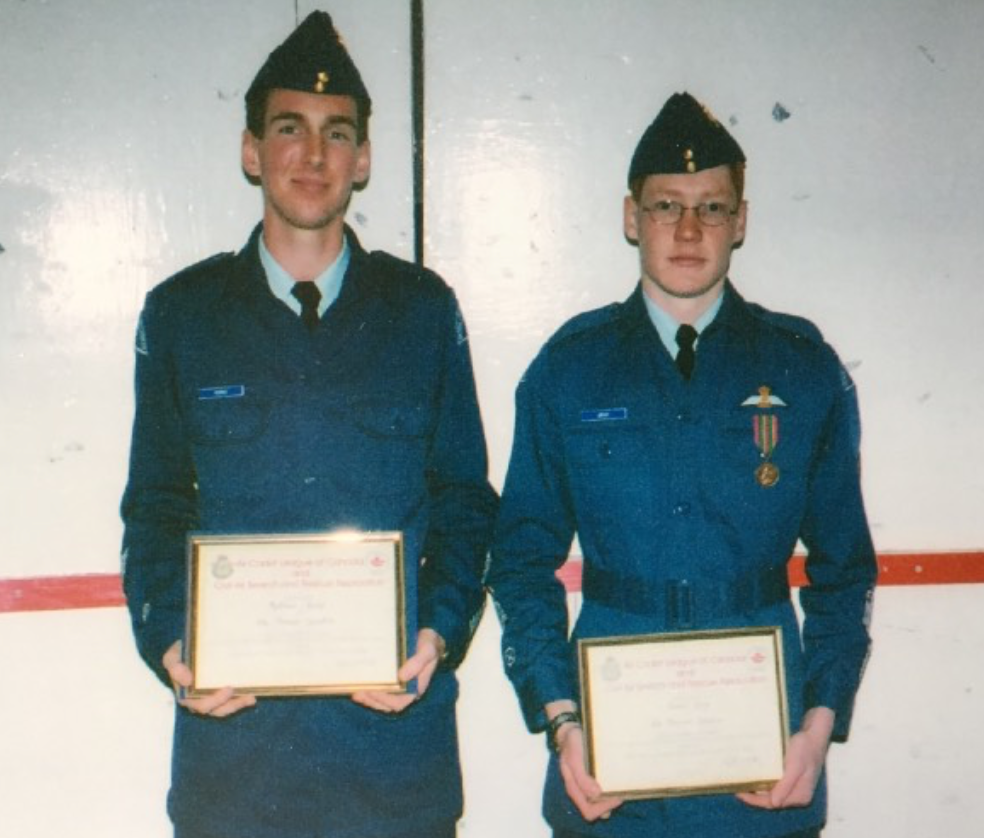 The Air Cadet students would not be taken on any CASARA training flights as they were not a CASARA member and were still under the rules and regulations of the Air Cadet League of Canada. Volunteer Air Cadets would receive aerial training when they were 18 years of age, were no longer an Air Cadet and joined CASARA. The first two volunteer Air Cadets to successfully graduate from the CASARA Air Cadet Spotter Program in May 2003 were from 596 Phoenix Air Cadet Squadron, Tatamagouche, NS.

During SAREX 2003 in Gander Newfoundland and Labrador several retired SAR Techs took the opportunity to pose for a photo during their conversation about the good old times as an operational SAR Tech. Coincidently, all four retired SAR Techs from the Canadian Forces had a connection to CASARA. Winston Hurry retired from the Canadian Forces and joined CASARA PEI. He served as a spotter and eventually became their Training Officer and Deputy Director. JP Carriere was a 424 Squadron, Trenton CASARA Liaison SAR Tech during part of his SAR Tech career. On retirement from the Canadian Forces, JP joined CASARA Newfoundland and Labrador and filled the positions of spotter and survival instructor. 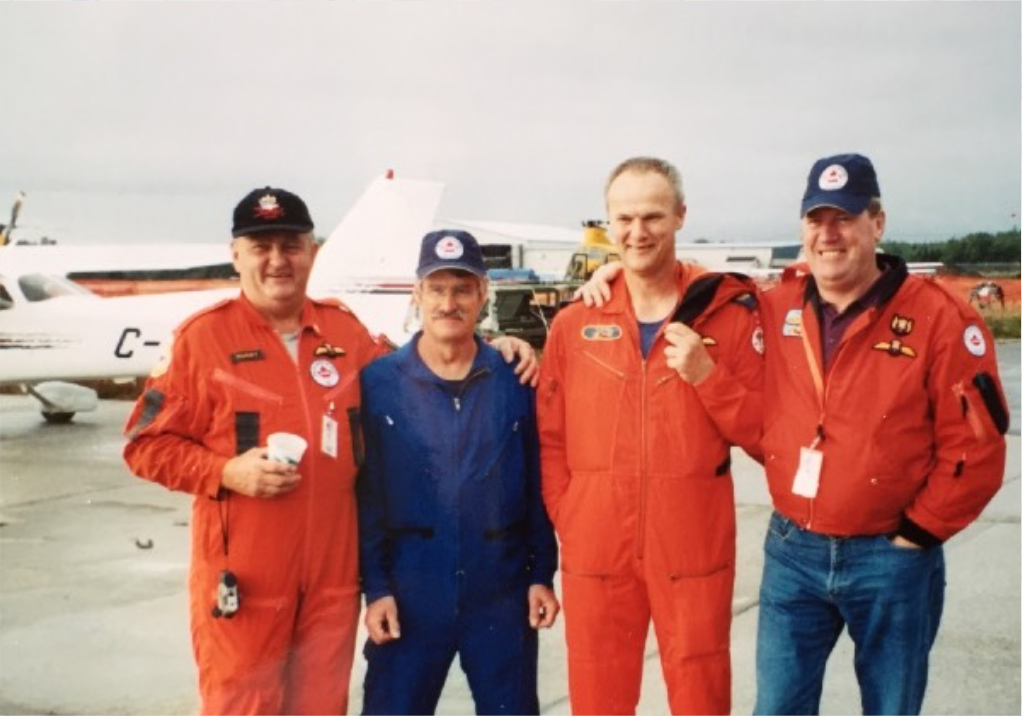 Appropriate CASARA wings and badges are worn on flying clothing to identify what an individual is certified/qualified to perform for the organization.

A winter dawn in the North Atlantic, 60 miles from Halifax. Vast grey rollers, their crests whipped by a howling gale, loom over the orange speck of a life raft. Crammed into it is the crew of a storm-battered ship that sank just after midnight. Cold and exposure are taking their toll, and the men in the life raft are growing weak. But as the sky grows brighter, they hear the sound of engines. Moments later, a big yellow helicopter thunders over the foam-streaked waves and hovers over them like a rescuing angel. Its pilot waves and the men send up a feeble cheer. In a few hours, they'll be safe in Halifax.

Around the world, scenes like this are played out every day -- not just at sea, but wherever people are lost, injured or in need of emergency aid. What helps make these rescues possible is COSPAS-SARSAT, an international system of satellites and ground stations that detects distress beacons and swiftly transmits their locations to local search-and-rescue (SAR) services, such as Canada's National Search and Rescue Program. Canada was one of the founding nations of COSPAS-SARSAT.

On June 13, 2005, Canada Post will issue a set of four domestic rate (50¢) stamps to commemorate Canada's role in SAR operations. The design of the pane is a little out of the ordinary, notes Danielle Trottier, Manager, Design and Production, at Canada Post. "This is a miniature pane, a double row of four stamps each, the rows arranged tête-bêche. This makes the pane reversible, so you can display it according to the language you prefer, and have the SAR logo appear correctly in both cases."The designer of the issue is Montreal's François Dallaire, whose stamp credits include Volunteer Firefighters (2003), Imperial Penny Postage (1998) and Industrial Design (1997). Dallaire is enthusiastic about the tête-bêche format, because it not only permits each stamp's design to stand on its own, but also emphasizes the major overall element of the pane's design: two curves mirroring each other, each suggesting Earth as seen from space, with a satellite photograph appearing within each curve."The mirrored elements represent the North and South hemispheres," Dallaire points out, "so that when you reverse the sheet, the overall design is preserved. I like that symbolism, because Australia, for example, also does search and rescue. It helps make it clear that helping people in this way requires a worldwide organization. And by placing the images of the satellites 'above' the curves, the design makes it clear that it's satellite communication that's the key to making the system work.”

Dallaire's designs for the stamps also suggest the multiple aspects of SAR. He created them around four themes: an alpine rescue, a rescue from the sea, a rescue by air and a ground rescue in which a dog is as important as the humans. "That's very important," he says. "We have to remember that animals also help save people -- it's not just us doing this." 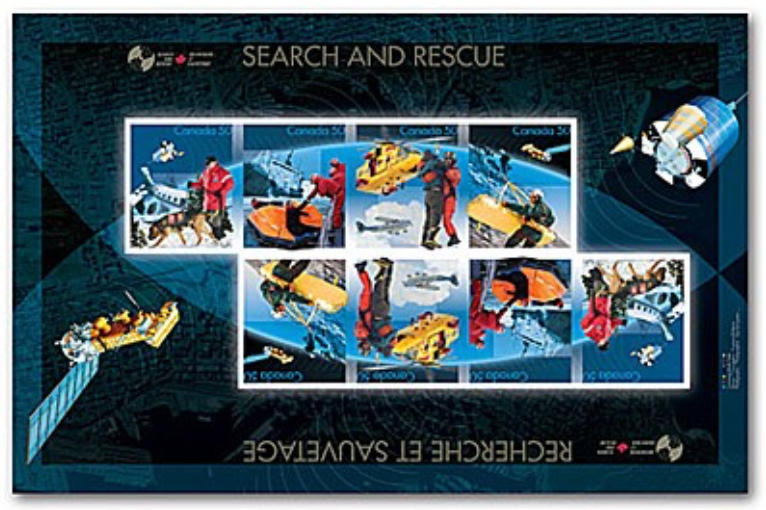 Miniature stamp pane, a double row of four stamps each.

With their evocative design and powerful images, the new SAR stamps are a fine commemoration of a service that has saved so many people from natural disasters and accidents, underground, on land, at sea and in the air. CASARA and Military SAR crews depicted on the same stamp demonstrates they both work well together to save lives.